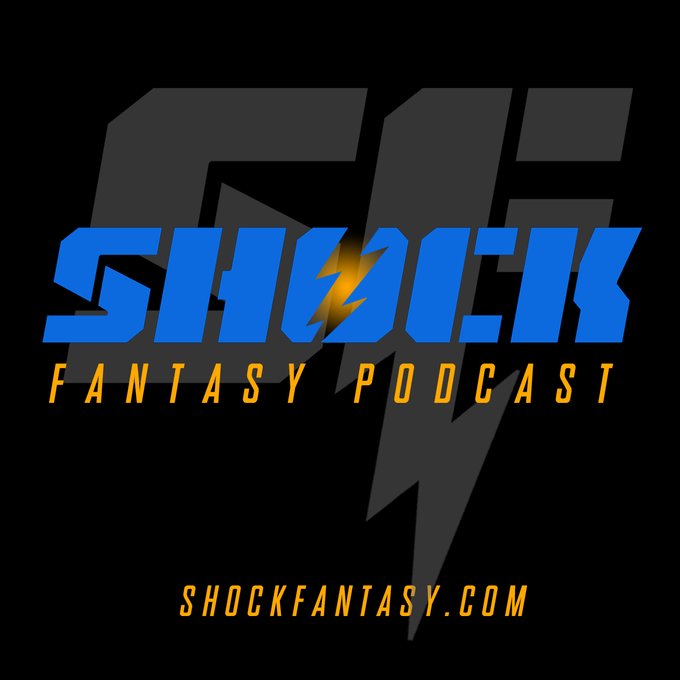 Hi everyone. I’m back with this week’s waiver wire article and would like to submit for your re-approval, the Todd Heap Memorial Injury Report. These are guys who had some notable injuries change what could have been a fun little day of football.

Make sure to listen to the podcast version of this by searching out the SHOCK FANTASY PODCAST and subscribing to it on your favorite podcast platform. It should also be on a widget on the site, if you want to just hear me read this to you.

Jameis Winston – 30% rostered
Five touchdowns against the Packers does not happen every day. Nor will it happen every week for Winston. There are real glimmers of hope here though. A full year learning under Drew Brees and Sean Payton is something real. Winston said that Brees taught him about completing the process of each play to the best of his ability, and it showed, as the former top pick did not throw a pick. I’d go 15% in SuperFlex and 8% in single QB leagues.

Taylor Heineke – 0% rostered
Heinieke will get the start for at least the next month and change. In a little more than half a game’s work, he was efficient, connecting on 11-15 passes (73.3%) for 122 yards and a score. Worth noting that all four of Terry McLaurin’s targets came from Heinieke. He’s got a little bit of running ability as well. He’s probably worth about a 5% bid in SuperFlex leagues, but not in a single QB league.

Justin Fields – 52% rostered
Dude already outscored Andy Dalton on Sunday night. It’s not if, it’s when. And honestly the Bears need the mobility that Fields brings with a line that is amongst the worst in the league. He’s going to put up fantasy points. You’ll be sorry if you don’t get him now. My guess is he’s not available in SuperFlex leagues, but if he is I’d throw a healthy 20% on him. You should be able to lock him up for 11% in a single QB format.

Jared Goff – If he throws 57 times a game (which he could), even he will be fantasy relevant.

Sam Darnold – Dumped it off to CMC 9-times… and ran one in. The weapons are good enough for him to improve on last week’s numbers.

Derek Carr – Looked impressive down the stretch against the Ravens. There’s a little bit of swagger there.

Kirk Cousins – Even though many people just don’t like him, he has the ability to put up fantasy numbers every week. Good weapons, doesn’t make a ton of mistakes that hurt you from a fantasy perspective.

Elijah Mitchell – 2% rostered
After Mostert went down, the 6th round rookie tallied 19 carries, 104 yards and a score against the Lions. With Mostert down for a week, it would not be surprising for Trey Sermon to be activated as well this next week to receive a shot. JaMycal Hasty is the other healthy running back on roster and is worth consideration as well. As Sermon was a healthy scratch due to performance in practice, I would imagine Mitchell has first crack to be the guy in a Shanahan offense, so he’s probably worth an early season FAAB bid of 20-30%.

Mark Ingram – NO!
Yeah. No. Just don’t do it. The Texans backfield is going to leave a lot to be desired this year. I know he had 26 carries. That’s a season high for him. Mark it down. Do not make a bid!

Tony Pollard – 52%
He will certainly be involved, especially in the passing game, catching all four of his targets against Tampa on Thursday. The Cowboys defense is awful, meaning game scripts may favor the more shifty Pollard more and more this season. Yeah, Zeke’s managers are already freaking out. If you’ve got Zeke on your roster without Pollard, a 12% bid is probably going to help secure him. Everyone else, he’s probably worth 10% and should be rostered.

Others:
Cordarrelle Patterson – Had 9 touches for the Falcons out of the backfield. That backfield is abysmal, and he will likely lead the backfield in fantasy points a few more times this year.

Wide Receiver
Christian Kirk – 15% rostered
Caught all five of his targets for 70 yards and a score against the amazingly terrible Tennessee secondary. The clarity of his position group is just not there though. AJ Green had 6 targets. Rondale Moore also had 5. Each of these players won’t see 5+ targets per week, so I feel like I’m going to take this as more of a good matchup than many. In 12-team leagues, I’m not targeting Kirk at more than a 1% bid, but I’ve been wrong before.

Jalen Reagor – 21% rostered
Is Jalen Hurts this good? Or are the Falcons this bad? That’s the ultimate question. Reagor hauled in all 6 of his targets from Hurts for 49 yards and a score, but I’m still a bit apprehensive. First, Falcons. Second, 6 catches for 49 yards is pretty bad for a WR. Let’s see some wiggle! Maybe we will. Maybe he figured it out. Upcoming matchups against the Niners, Cowboys, Chiefs and Panthers are all plus. In fact, there’s no real passing stoppers for the Eagles until Week 9. Okay, I’m convinced. 8% bid on Reagor.

Sterling Shepard – 39% rostered
I really try to stay clear of receivers who play with a QB I believe to be bad. Daniel Jones is bad. Shepard’s touchdown included some stellar YAC, and his 9 targets and 7-113-1 is a good fantasy line. I just feel like I’ve seen this movie before. I’m not bidding on Shepard, but you can probably nab him in your league for 3%, just like his new jersey number.

Bryan Edwards – 19%
People chalk up all of last year’s receiving success for the Raiders to Darren Waller. And that’s mostly right. Nelson Agholor is gone though, and so are 82 targets, a YPC that led the league, and 8 touchdowns. People drafted Ruggs to fill that role, but not so fast. Edwards seemed to be the guy that Derek Carr targeted in crunch time, and he was 5 inches short of a game winning touchdown in OT, that would have really made his 4-81 pop. Unfortunately the schedule is brutal coming up, with the Steelers, Dolphins, Chargers, Bears and Broncos in the next 5 games. He won’t earn many starting grades in the near future. I’d bid 1% if you need a WR5 in a month and change when his schedule gets easier.

Nelson Agholor – 33% rostered
Make no mistake. Agholor is the top WR on the Patriots, and is the best WR they’ve had since Julian Edelman was actually healthy like 5 years ago. He saw 7 targets and a 5-72-1 line, and that’s with Mac Jones getting through his first game jitters. This week the Pats get the Jets, and no one gets jitters playing the Jets… Jetters? He’s going to return WR3 value this year, so I’d bid 13%.

Tim Patrick – 2% rostered
Tim Possible should fill the Jerry Jeudy role while he’s missing for a month or more, and we’ve seen him be a good player for a while now. His 4-39-1 last week should increase this week against the Jags (and then they get the Jets in Week 3). Remember, Teddy kept 3 WRs active in the top 30 last season. He can do it again. I mean this with all sincerity, wide receivers with boring names come at a discount. So you’ll only need to bid 2% on Tim Patrick.

Cedrick Wilson – Should fill in for Gallup for the next month or so as the third WR in Dallas.

Tight Ends
Juwan Johnson – 11% rostered
Caught all three of his targets, two of which were in the end zone. He’s going to be the hot pick up at the position this week, but I hope most of you listened to my FFW call on him a few weeks ago. He’s got great chemistry with Winston and despite Trautman getting some play, Johnson, a converted WR, was on the field a ton. You’ll have to drop like 14% on him at this point.

James O’Shaughnessy – 0% rostered
Admittedly, I don’t want him to be a thing because I don’t like spelling his name. But, then on the other hand, I’d get to say his name like Terry McLaurin on the radio, so… whatever. His 8 targets from Sunshine were second-most on the team behind DJ Chark. A matchup against Denver this week seems like a bad plan, but Zona, Cincy and Tennessee in the next couple of weeks are decent. It’ll only take a buck.